OFFICER OF THE MONTH 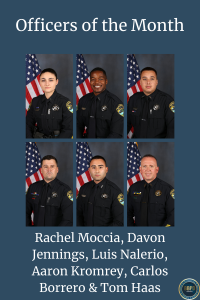 On Sept. 12, officers responded to a report of a Lyft driver who had been violently attacked and left in critical condition by the driver of another vehicle. Officers quickly rendered lifesaving aid to the victim. A suspect description was broadcast by the officers, who then saw him near the crime scene as he drove off on a motorcycle. Officers pursued the suspect into Delray Beach, and with assistance from the Delray Beach Police Department and Palm Beach County Sheriff’s Office, he was quickly located and taken into custody to face charges of attempted homicide. Thanks to their quick actions and keen observations, a violent criminal is off the streets. For their efforts, Officers Moccia, Borrero, Jennings, Kromrey, Nalerio and Haas are Officers of the Month.